Here are just some of the interesting things we've come across in our geocoding travels. If you find something thought provoking we'd love a pull request!

A stravenue (portmanteau of street and avenue) is a type of road particular to Tucson, Arizona. The United States Postal Service officially supports the abbreviation STRA for stravenues.[1] A stravenue runs "diagonally between and intersects a Street and an Avenue."[2] By convention in Tucson, streets run east-west while avenues run north-south. However, in a few areas of Tucson, primarily around the central part of the city, which is divided by railroad tracks running diagonally from southeast to northwest, builders created small subdivisions of roads and houses that also are laid out on a diagonal basis rather than the normal east-west or north-south. Most of these subdivisions are located near either Benson Highway or Aviation Highway, which also run southeast to northwest.[3] "The word Stravenue was originally coined by Roy Drachman when he was developing the subdivision called Pueblo Gardens," in 1948.[4]

In Portland, there are Zero-Leading Addresses that are different from non-Zero-Leading addresses. Said another way, there could be two separate residences ~1 mile apart, that have almost the exact same address, with the only differentiation being a leading-zero on the number (not really a number in that case). Trimming off leading zeros from address numbers is not a valid practice for addresses in Portland.

see: https://en.wikipedia.org/wiki/Portland,_Oregon#Neighborhoods “East-West addresses in this area are denoted with a leading zero (instead of a minus sign). This means 0246 SW California St. is not the same as 246 SW California St. Many mapping programs are unable to distinguish...”

Agloe is a fictional hamlet in Colchester, Delaware County, New York, that became an actual landmark after mapmakers made up the community as a "copyright trap".

Dissatisfaction among residents rose over Circleville's layout, however. During 1837 at the request of the town, the Ohio General Assembly authorized the "Circleville Squaring Company" to convert the town plan into a squared grid, as was typical of other platted towns.

What's really unusual about Pheasant Island is that Spain and France don't share the territory at the same time. By the terms of the 1659 treaty, they alternate sovereignty. Every February, French representatives meet their counterparts on Pheasant Island to hand it over to the Spaniards; every August, they get it back. This has happened over seven hundred times. Geography buff Frank Jacobs has likened this to a 350-year timeshare, or "an extremely slow game of ping-pong." To me, it sounds more like a divorce custody arrangement. "Is this your weekend to be French? France will pick you up after school."

Carmel-by-the-Sea's one-square mile village is as unique in charm as it is in fun facts. No high heels law*, no street addresses, Clint Eastwood was once mayor, and Doris Day helped make Carmel dog heaven on Earth are a few of the most popular ice breakers when meeting locals and visitors in this European-style town. Also, there are no chain restaurants permitted and an ice cream ordinance. 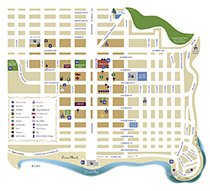 See an error in this documentation?
Kindly submit a pull request to Pelias or open an issue here and we'll fix it.